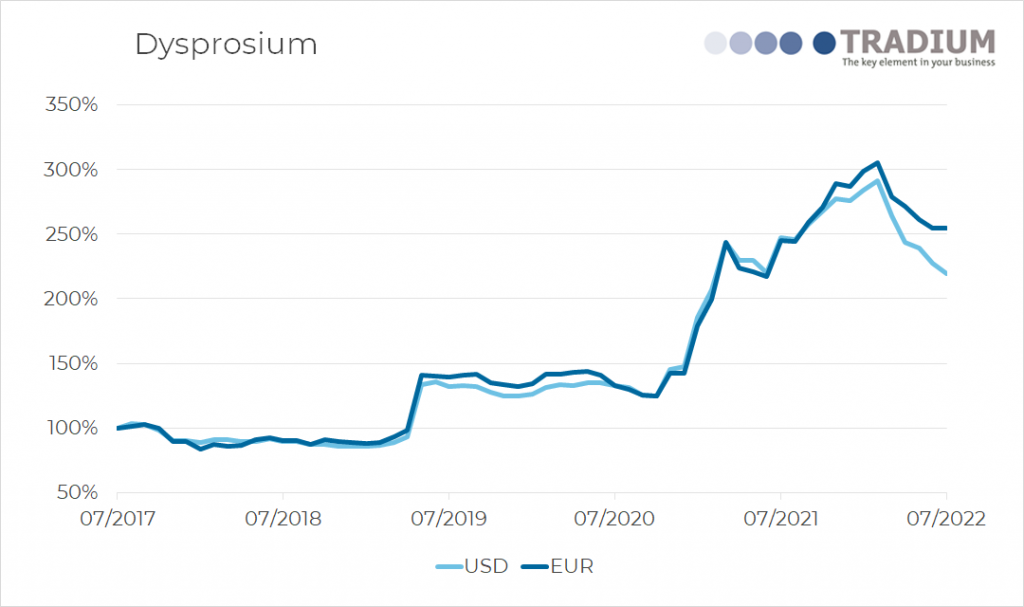 Dysprosium is a chemical element with the symbol Dy and atomic number 66. It is a rare earth element with a metallic silver luster.

Dysprosium is seldom encountered as a free element in nature and is usually found in minerals such as xenotime, dysprosium-yttrium fluorite, gadolinite and euxenite. 32Dy makes up about 0.06% of the Earth’s crust.

Dysprosium has unusual magnetic properties, and it is dysprosium that gives neodymium-based magnets their exceptional strength compared to other magnets made from only rare-earth metals. This rare earth metal has a high coefficient of thermal expansion and contains phosphate for medical purposes. Applicants in today’s industry include glass plant construction and dysprosium lasers for early diagnosis of prostate cancer.

Dysprosium is also used as an alloying agent in dysprosium iron alloys used in control rods of nuclear reactors because of its neutron-absorbing properties.

But more than anything else , Dysprosium is an integral part of the “green” economy and is one of the energy transition metals essential to many technologies being developed to address climate change. It is used in making electric vehicles, wind turbines, solar energy production, and energy-efficient lighting.

Did you know? The word "dysprosium" originates from dysprositos, which means “difficult to get at” in Greek.

Where is Dysprosium Produced?

Dysprosium is obtained primarily from monazite sand, a mixture of various phosphates. The sources with the highest percentage of contained dysprosium are the ion adsorption clays of Jiangxi Province, China.

China is the world’s largest dysprosium producer, with over 90% of global production. Other producers include Russia, Malaysia, and Australia. 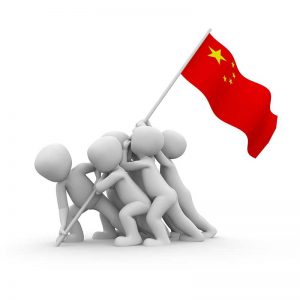 Interesting Dysprosium Fact Dysprosium sulfate is used as an additive in varnishes and paints to increase their resistance to heat and corrosion.

What Factors Determine the Price of Dysprosium?

While most rare earths are actually quite common in the earth’s crust, it’s the expensive mining and extraction process that makes them scarce and valuable. China is by far the largest supplier and refiner of dysprosium and other rare earth elements and hence controls the supply. As such, it’s not just the production limitations determining the supply (and price) but also geopolitical events and China’s export quotas.

Did you know? Dysprosium can cause severe skin irritation, burns, and, if ingested, even death.

Dysprosium is vital to a wide range of industries (incl. nuclear reactors), but in terms of the future, especially the “green economy” industry. The demand for electric cars, wind turbines, and solar panels is forecast to skyrocket over the next 10 to 20 years.

For example, BMW announced in November 2021 that they are sourcing 20 billion euros of raw materials for electric vehicles. Only two days later, Ford announced they were about to make the most significant single investment in their history, $11.4 billion to what they call a mega campus of factories for electric vehicles. So that is over $30 billion (!!!) of investment in the space of a week from just two car manufacturers!

As far back as 2011, the United States Department of Energy identified dysprosium as the single most critical element for emerging clean energy technologies. They did this because of this rare earth’s wide range of current and projected uses, together with the lack of any immediately suitable replacement. Even their most conservative projections at the time predicted a shortfall of dysprosium before 2015. This is why it’s not just companies that have been stockpiling dysprosium reserves but countries too.

China currently controls most of the production of dysprosium and imposes export quotas to ensure their own companies get the supply they need but also, at times, as a bargaining tool in the ongoing trade war with the US (and EU).

Hence it is forecast the price of dysprosium, already up +72.43% since 2020, will continue to increase in the foreseeable future. This is because of the exponential increase in demand (just think “green”) AND China’s constraints in the supply chain.

Interesting Dysprosium Fact At room temperature, it's a bright silver metal that slowly oxidizes in air and readily burns. It is also soft enough to be cut with a knife.

How to Buy Dysprosium

Industry-grade dysprosium powder is usually sold at minimum 99.5% purity, priced in USD, and the weight unit is per kilogram. Safe storage is essential because, like many powders, dysprosium may constitute an explosion hazard when mixed with air and an ignition source is present.

Corporate buyers such as Tesla, BMW, Ford, and Mercedes use well-established metal dealers to buy industry-grade dysprosium. Renowned metals dealers, such as ourselves, act as key intermediaries between the high-tech industries and the producers of the critical rare earth elements needed by these industries.

Unless you purchase from a reputable dealer (e.g. if you buy on Amazon, Alibaba, or eBay), there’s no guarantee of purity and no possibility of liquidation to anyone other than hobbyists.

Any discerning investors who want to benefit from future price increases by purchasing and owning some dysprosium can do this through us. By doing so, you are buying from the only globally licensed industry supplier offering this option to private investors.

Dysprosium futures contracts can also be traded in the Shanghai Metal Market (SMM).

How to Sell Dysprosium

Please note that the only end buyers for your industrial-grade dysprosium are industry buyers such as General Motors, Honda, Tesla, Apple, and First Solar. These buyers will only buy from established industry suppliers with documentary evidence of the complete chain of custody. They don’t buy from the likes of eBay, Alibaba, or Amazon.

No industry buyer will transact with a seller that cannot provide the entire chain of custody documentation, analysis & purity reports, and proper storage facilities. We guarantee the fast and safe liquidation of the rare earth elements of our investors because we’re such an industry supplier.

Did you know? Dysprosium is utilised to coat the surface of hard drive platters to improve their magnetic storage capabilities.