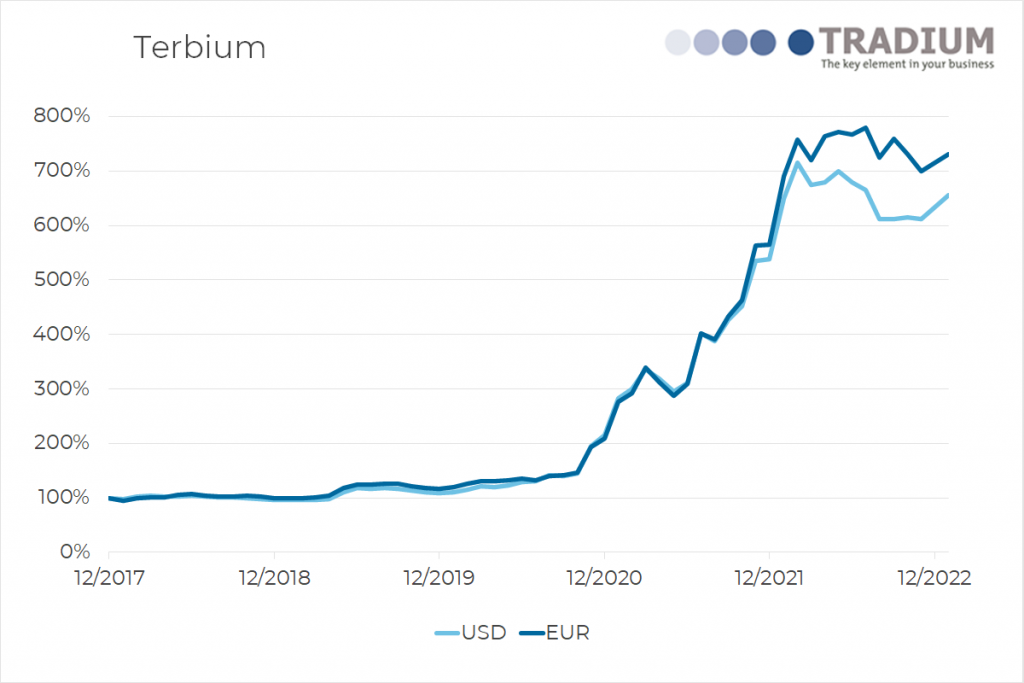 Terbium is a chemical element with the symbol Tb and atomic number 65. It was discovered in 1843 by Swedish chemist Carl Gustaf Mosander.

In metal form, terbium is a silvery-white rare earth metal. In its oxide form, in which it is sold commercially, terbium is a black-brown powder.

Terbium does not occur naturally and is considered one of the “rarest” of Rare Earths.

Terbium is a rare earth element used in several different applications. For example, it’s a dopant in semiconductors, a phosphor in fluorescent lamps, and a colorant in glass. It is used in LCD screens, as it helps to create a bright, clear image.

Terbium is also used in lasers and optical fibers. In addition, it is often used in alloy steels and stainless steel, as it can help improve the metal’s strength and durability. Nuclear reactors sometimes use terbium, as its radioactivity can help to generate heat.

Terbium is also suitable for producing magnetic components, especially in neodymium-iron-boron magnets. Together with zircon dioxide, it’s indispensable in one of the most important industries of the future, namely as a stabilizer of high-temperature fuel cells.

As a result, terbium plays an essential role in a wide range of industries and technologies. In addition to its industrial uses, it’s also used in jewellery and as an investment commodity.

Did you know? The name terbium comes from the village of Ytterby in Sweden, where Mosander discovered it.

Where is Terbium Produced?

Terbium is never found in nature as a free element, but it’s contained in small amounts in minerals such as monazite, euxenite, and xenotime.

China currently mines more than 99 percent of the world’s terbium. The richest commercial sources of terbium at the moment are the ion-adsorption clays of southern China.

Other smaller mining areas are in the USA, India, Brazil, Sri Lanka, and Australia.

Interesting Terbium Fact In metal form Terbium is so soft it can be cut with a knife.

What Factors Determine the Price of Terbium?

Like any commodity, terbium’s price is determined by the law of supply and demand.

We have already established that terbium is a vital component in a wide range of industries and technologies. So, if the demand for LCD screens or lasers increases, the need for terbium grows too.

With China being the dominant supplier, China currently controls the supply of terbium. This means that the global supply is determined by how much China decides to export after they satisfy its own demand.

In addition, China has been using export quotas on rare earths as bargaining tools in their ongoing trade war with the US and Europe. And any restrictions on the terbium supply increase the price.

Did you know? To defeat counterfeiters, Euro banknotes use rare earth chemistry. Shining UV light on a euro results in green fluorescence from terbium, red from europium, and blue from thulium.

Due to terbium’s increasing use in high-tech components such as high-temperature fuel cells (in electric cars!!) and permanent magnets (in wind turbines), experts, such as The Fraunhofer Institute for Systems and Innovation Research, predict demand far exceeding supply.

Terbium has already increased more in value than any other rare earths recently, as shown in the Bloomberg chart below: 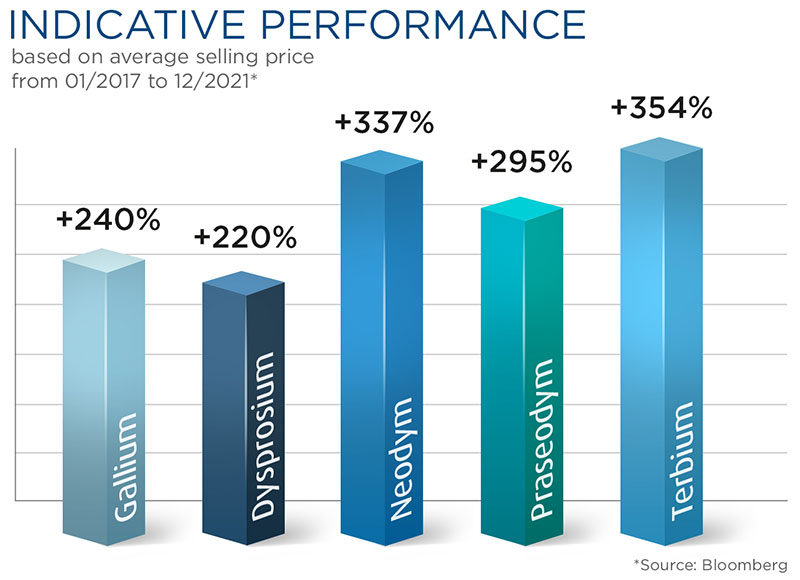 However, our chart only represents the price until the end of last year and before Russia’s invasion of Ukraine. As a result, Europe accelerated its transition to greener energy to wean its dependence on Russian oil and gas as quickly as possible.

This was good news for investors holding vital raw materials for electric cars, wind turbines, and solar panels. But the demand for terbium has yet to peak. Analysts from the Fitch credit rating agency recently stated that the demand for energy transition metals would peak by the 2040s when they anticipate the bulk of the global low-emissions infrastructure will have been built.

But remember that China dominates terbium and other rare earths’ production, extraction, refining, and supply. It has taken them 30 years to establish this position, and we now live in the reality that the US, EU, and other developing nations need to wait in line to see what China exports after they have satisfied their domestic needs.

We cannot overstate the importance of China’s position. They can economically weaponize the rare earths card by restricting quotas at any time. They have done so in the past (e.g., during a territorial dispute with Japan in 2010), and they will likely do so again in the future. China also has its own plans for electric cars, having doubled its production last year alone, and also aims to move up the value chain in solar and wind power now its supply chain dominance is established.

Hence there will be shortages, and further terbium price increases are predicted as demand continues to rise while supply is restricted. The EU is already aware of this, stating that rare earths are fast becoming more important than oil and gas.

So, the prospects for investors holding terbium as a physical asset should be very good in the medium and the long term.

Interesting Terbium Fact Terbium powder is very irritating when it comes into contact with our skin and eyes.

How and Where to Buy Terbium

Commercial-grade terbium is usually sold and bought in its oxide (powdered) form, as in the right conditions, oxides can be stored almost indefinitely.

While it’s possible to buy small amounts of terbium at online marketplaces like eBay, Alibaba, and Amazon, corporate buyers like Ford, Honda, and LG only use reputable metals dealers. Globally licensed market metals dealers, such as ourselves, act as key intermediaries between the high-tech industries and the miners & producers of the necessary rare earths and strategic metals for these industries.

We provide the full chain of custody, guaranteeing the quality and purity (min. 99.99%) of the terbium they buy. Our storage facility also offers the right industrial conditions for storage, meaning any discerning investors who want to benefit from future terbium price raises by purchasing and owning some terbium can do so safely through us.

Terbium futures contracts can also be traded in the Shanghai Metal Market (SMM).

How and Where to Sell Terbium

The only serious end buyers for your industrial-grade terbium are companies such as Sony, Tesla, General Motors, and BMW. These companies will only purchase from reputable industry suppliers who can provide the complete chain of custody, analysis reports, and appropriate storage facilities.

Places like Alibaba, eBay, and Amazon only attract hobbyists. Only because we are an industry supplier can we guarantee the safe and fast liquidation of the rare earth metals of our investors at market rates.

Did you know? Terbium is not the only rare-earth element that the Swedish chemist Carl Gustaf Mosander discovered. He is also credited for the discovery of lanthanum and erbium.